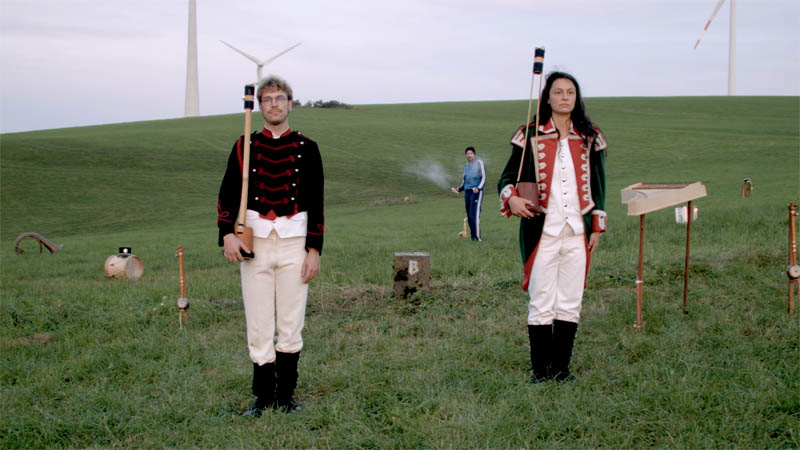 In this video-performance by Two Envelopes and director Hendrickx, El Clave Mal Temperado is given a prelude where two uniformed characters (Green and Black) are drawn along by sheep ambling their path. Through stories we understand that sheep move in flocks with loyalty or break away mischievously.

We next meet Green and Black as they march resolutely around a border stone. Ektaras in the hands of Green and Black sing ominous tones, then are used to assimilate military drills which typically demonstrate strength, discipline and precision. (Instruments and weapons have been compared before – Guthrie’s guitar proudly reads “This machine kills fascists” and academia has drawn parallels between surf music and the ritual of hunting).

They tune to a mal-tempered harpsichord and we see Green grow more frustrated before finally everything is ready and performances of national anthems begin. Rather than practised precision and finesse, these renditions encompass the introspective and desultory, the exaggerated and comical. A counterblast to the jingoism and pomp often associated with national anthems.

Between lands, the lines we see on maps are instead delineated with the occasional stones featured here (or barbed wire, or walls). When Green and Black give their final pronouncement of “Lorca” (the poet, murdered during the Spanish civil war), Blue appears to mark the border with a smoke trail. Smoke, the lingering pall of war and unrest, of contests for land and treasures.

The sheep in the prelude might recall Calvino’s story Black Sheep which portrays a world where the truth seems strange in a world of lies. What might this suggest for the title of the work, a reference to Bach’s celebration of a tuning system, Das Wohltemperierte Klavier. Could El Clave Mal Temperado be critical of the sanctity commonly afforded to unity and standardisation? After all, tuning systems are always compromises; inadequate frameworks. If we can’t have perfection, why settle with almost?

Guajardo notes that the work was completed on July 18th, the anniversary of the Spanish coup of 1936. It was published as a holograph for the series Música Clandestina which encourages the composer to relinquish complete control rather than working within the established frontiers of their minds. Reflecting on this, Guajardo asks, “Can we really say that we own our compositions?” Through the realisation of this video with Hendrickx and Two Envelopes, can other realms of ownership be brought into question? 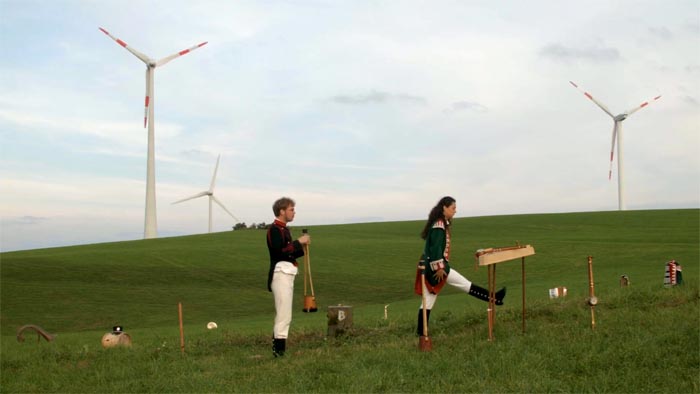 Find us on Social Medias :